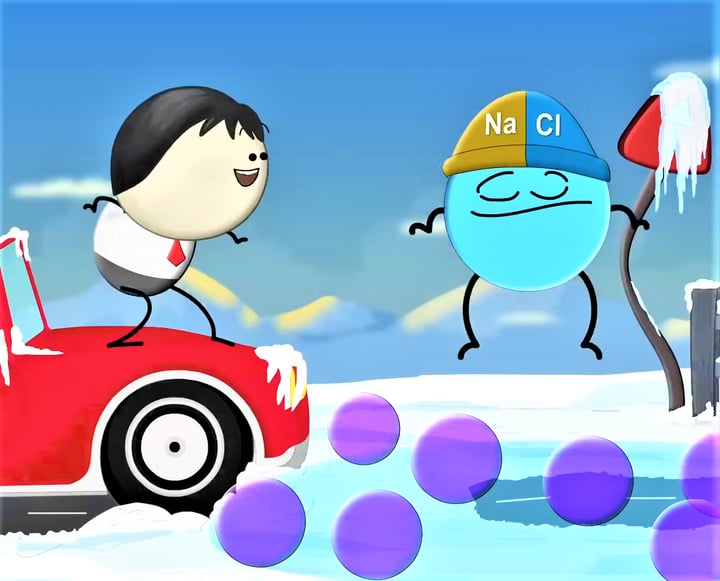 Every winter we have the same stamp: trucks scattering sacks and sacks of salt on the road to prevent it from freezing, but for what reason?
What happens between salt (NaCl) and water (H2O) is pure chemistry. Popular belief says that salt melts ice, but that is not exactly what happens.
To understand the process well you have to know how water and salt molecules are formed.

Salt is made up of crystals of sodium chloride, the same sodium atoms as chlorine, and they are held together by electrostatic force. Chlorine gives one electron to sodium, leaving one with a positive charge and another with a negative charge. The same forces act on the water molecule, which although apparently neutral, its components do have a charge. The oxygen is negatively charged and the two atoms of hydrogen are positively charged therefore remain attached to the oxygen.

In addition there is another attractive force in water, known as 'hydrogen bridges', which are also the cause of some of its most interesting properties. It is the force of attraction between the oxygen of one molecule and the hydrogens of the other. When the temperature rises above 0 degrees, the molecules move very fast, and these bonds are not strong enough to fully bind, remaining in a liquid state. However, below zero, its speed decreases, forming hydrogen bonds and solidifying.


This is where the chemistry of salt comes in. When it dissolves in water, the sodium (positive) and chlorine (negative) ions float, and one attracts hydrogen and the other oxygen, breaking the aforementioned hydrogen bonds.

Thanks to this, the water does not solidify, and the resulting compound has a freezing temperature much lower than that of normal water, around -21ºC. In this way it is easier for the roads to remain with little ice during the winter, since temperatures are not usually so low. This formula is more effective when there is still no ice, that is, it is convenient to anticipate frost, but if the forecast fails, the remedy also works. It will take longer to take effect but the end will be exactly the same.
It would be an ideal remedy if it weren't for the inconvenience to the environment. The salt that we throw into the road raises the levels of chlorine and sodium in the water, ending up in the soil, the substrate where plants live. In fact, in some countries it is forbidden to use salt to prevent freezing of the road, and it is even punished with significant fines. There are other, cleaner forms of antifreeze, such as potassium acetate or calcium-magnesium acetate, which are not harmful. Their problem resides in the high cost that they represent compared to the cheap use of salt.
Questions and answers science Science | Questions and answers