The Turing Award 2019 was awarded for computer graphics

The Turing Award 2019 was awarded for computer graphics 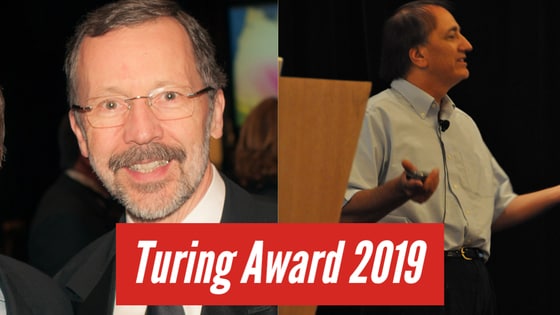 The Computer Science Association announced the winners of the Turing Award for 2019 - the Americans Patrick Hanrahan and Edwin Catmull.

The Award for Excellence in Computer Science went to researchers who have developed innovative methods of computer graphics, which are now widely used in the film industry, according to the official website of the award.

The Turing Award is an annual award for researchers in the field of computer science, which is presented by the International Computer Science Association. The award is named after the outstanding 20th century British mathematician and computer scientist Alan Turing, who laid the foundations of theoretical computer science long before the first electronic computers appeared.


In the 21st century, major IT companies such as Intel and Google began to sponsor the award. Thanks to their support, since 2007 the winners have received additional cash prizes in the amount of 250 thousand dollars, and since 2014 this amount has increased to one million dollars.

Over the years, laureates have included many renowned researchers such as Donald Knuth and Tim Berners-Lee. Last year the award went to the founders of modern artificial neural network architectures. The award is often called the equivalent of the Nobel Prize for Computer Science.

This year the award went to Patrick Hanrahan and Edwin Catmull, key figures in the history of the American film studio Pixar, which produces animated videos and computer special effects. Catmull was one of the founders of the company, and Hanrahan was one of the first employees in 1986.

They received the award "for their fundamental contribution to 3D computer graphics and their revolutionary impact on computer image generation in film and other applications.

Catmull received his PhD in Computer Science from the University of Utah in 1974, and one of his research supervisors was computer graphics pioneer Ivan Sutherland, who also won the Turing Award in 1988.

In his dissertation, Catmull replaced polygons with a fundamentally new description of curved areas, resulting in two new methods: Z-buffering and texturing. The first allows you to work with the depth of the image in computer graphics, and the second puts the three-dimensional objects and two-dimensional images in line.


At Pixar, he was a leading developer of new graphics systems that made it possible to depict curved surfaces with realistic properties and lighting. One of the key innovations was shaders, with which the program processed reflected light. Hanrahan also invented methods to display projections of complex three-dimensional objects, such as smoke layers, and developed ways to render skin and hair realistically using subsurface scattering of light.

One of the first animated films created with the full use of three-dimensional graphics technology, was "Toy Story" in 1995. All relevant methods were invented a few years earlier, but the computing power of computers before that was not enough for full-scale application.

In the field of computer graphics, there are other relevant developments. Thus, previously, the researchers presented an algorithm for describing three-dimensional models in several lines, used the neural network to create realistic 3D models of the terrain and taught the network to turn 2D-images into 3D models based on the surface of objects.