A planet that spills iron from the sky

So why shouldn't you get caught in the evening rain on WASP-76b? 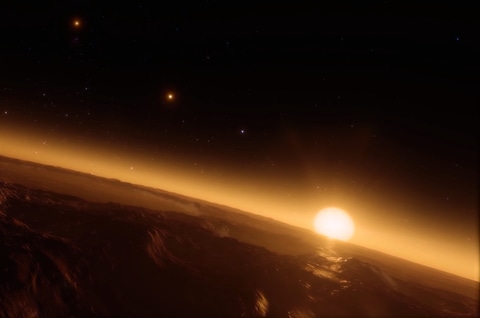 And it will rain iron...

In the constellation of Pisces, 400 light years away from Earth, lives a planet like the gas giant WASP-76b, which revolves around its star with dizzying speed. This star is the same as our Sun, it is twice as big and noticeably warmer.

Not surprisingly, WASP-76b belongs to the so-called class of hot jupiters, the surface of this planet is heated to such temperatures that the metal turns into steam. And where there's steam, there has to be precipitation.

"It can be said that it rains in the evenings on this planet, but it rains with molten iron," explains David Ehrenreich, an astrophysicist at the University of Geneva.

WASP-76b is a strange planet


Not only is it exposed to solar radiation thousands of times more powerful than the Earth, but it also consists with its sun in a so-called Tidal locking, that is, it rotates synchronously with it and always faces the sun with one side.

Exactly the same relationship is established between the Earth and the Moon, the back side of which we never see.

In the case of WASP-76b this means that on one side of the planet there is always a day and the temperature stays around 2400 degrees Celsius, and on the other side there is a night and it is cooler, only 1500 degrees.

As computer modeling has shown, such difference in temperatures between day and night side should cause the strongest winds, which carry metal steam over the planet. And iron atoms on the hot daytime side, joining the molecules on the night side, would rain with molten metal.

But the scientists had no physical evidence, and then Ehrenreich's team decided to study the terminators (we are not talking about killer robots, but about the lines separating day and night) to see how asymmetrical the chemical picture is in the day and night sides.

Using high-dispersion spectroscopy, they found iron spectra in the atmosphere at the evening terminator - where day turns into night.

There was no such spectrum on the morning terminator, which was a very strong argument for iron rain, because liquid iron is the most persistent metal-containing condensate.

Astronomers who had previously encountered exoplanets with iron and even corundum clouds (of which, in theory, rubies and sapphires could have been raining) are now looking forward to new space weather wonders.

The observations show that iron vapour is abundant in the atmosphere of the hot day side of WASP-76b," added María Rosa Zapatero Osorio, astrophysicist at the Centre for Astrobiology in Madrid and chair of the "Espresso" science team.

A fraction of this iron is carried to the night side due to the rotation of the planet and atmospheric winds. There the iron meets much cooler environments, condenses and rains down."