Italian plane will be "detained" on arrival in Mauritius. The authorities "demand that all people on board quarantined or return directly back" amid concerns about the coronavirus that killed SIX in Italy.

🔹 Passengers from the Italian regions most affected were detained on an Alitalia flight after arrival in Mauritius.
🔹 Forty of them have finally decided to return to northern Italy, where the number of virus deaths has risen to six.
🔹 Two men aged 84 and 88 and a woman in a hospital in Brescia were confirmed as victims four, five and six.
🔹 Britain said the "threat is low", while France has rejected requests to close its mountain border with Italy.
🔹 Italy confirmed 219 cases of the virus, by far the highest number outside of China, Japan and South Korea.
🔹 Lombardy and Veneto closed cities and banned public demonstrations with closed schools to stop the virus.
🔹 A passenger left a flight from London to Milan today because he fears that tourists may spread the virus throughout Europe. 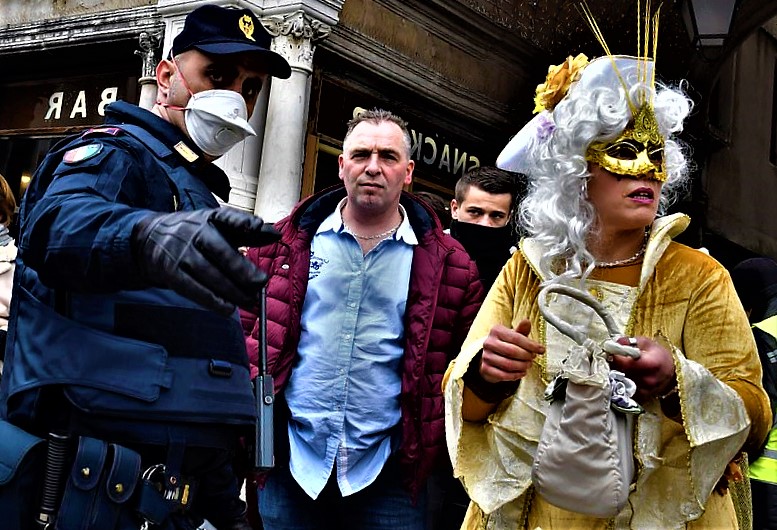 An Italian passenger plane was grounded today in Mauritius for fear of the coronavirus, after Italy confirmed its sixth death from the virus in the first major outbreak in Europe.

Dozens of passengers from Lombardy and Veneto - Italy's two most affected regions - have been ordered to return home or be quarantined in the Indian Ocean country, the airline Alitalia said.

Forty of the 224 people on board have finally decided to return to northern Italy, where 50,000 people have been placed under house arrest, schools have been closed and public demonstrations have been banned to drastically contain the virus.

It is still unclear whether other passengers or crew members were quarantined in Mauritius, after initial reports indicate that there were about 30 more people on board the plane from the affected regions.

Three more deaths were confirmed today in Lombardy after an 84-year-old patient from Bergamo, an 88-year-old man from Caselle Landi and a woman in a hospital in Brescia died from the virus, bringing the number of deaths in Italy to six.

The epidemic has raised fears that tourists returning from Italy may cause the epidemic to spread throughout Europe, with many Britons returning to school and work after today's intermission.

A British Airways flight to Milan was delayed this morning after a British passenger panicked in Heathrow shortly before departure, presumably due to fear of contracting the virus.

BA said it would "review the situation today", but the British government insisted that "the threat to the British public is currently low".

Not even the Foreign Office's advice to British tourists to "follow the instructions of local authorities" has changed, while Ireland has gone further and advised against going to virus hotspots.

A man returning to the UK from Codogno - one of the closed cities - said he called the National Health Service today, but was told to "continue as usual".

Diego Gullo went into voluntary quarantine and expressed doubts about the UK response after the NHS suggested his wife and children go to a reception centre.

France rejected requests to close the border with Italy, although today passengers of a bus from Milan were detained in Lyon after the driver was taken to hospital with possible symptoms of the virus.

🔹 Italy confirmed 219 cases of the virus, by far the highest number outside China, Japan and South Korea.

The authorities in Lombardy and Veneto closed 11 cities and banned public events, including trade fairs, while the famous Milan Cathedral was closed to visitors and bars and restaurants were closed.

This Drone has captured the massive Mask Line in the city of Daegu in South Korea.

Photos show what Italy is like under lockdown as the country ...
Business Insider Nordic, Coronavirus fears in Europe -13 hours ago.
Italy is now the focal point of the novel coronavirus outside Asia. Over three days, there was a rapid spike in confirmed cases in the northern ...

How safe is it to visit Italy after the coronavirus outbreak?
The Local Italy, Coronavirus fears in Europe-16 hours ago. The patient comes from Lombardy, the region where the important outbreak of coronavirus has occurred these days in the north of Italy. The Italian tourist showed up yesterday at the health centre around 1pm with a fever and said that he was ill. Seeing his place of origin, he was preventively isolated and the samples were sent to Public Health, a department that eventually confirmed the infection.

Italian stocks plunge 5.5% as coronavirus shuts down towns ...
CNBC-16 hours ago. The Italian patient with coronavirus Covid-19 is currently in the Hospital Universitario Nuestra Señora de la Candelaria, in Tenerife, and is progressing well. He remains isolated and awaiting further tests.

WHO says coronavirus outbreak in China has peaked, new ...
CNBC-17 hours ago

Coronavirus: World must prepare for pandemic, says WHO
BBC News-16 hours ago

The Coronavirus Stalls Milan, Italy's Economic Engine
The New York Times-11 hours ago, Coronavirus 2020.
MILAN — The landmark Duomo Cathedral, its spires towering over Milan, is closed. So are La Scala, Italy's premier opera house, and the city's ...
Northern Italy Authorities Impose Stringent Measures Amid ...
HuffPost, virus outbreak in italy, Feb 2020. The people in charge of the H10 Costa Adeje Palace would have decided to strictly follow the protocol of action in the face of this epidemic of coronavirus and no one is allowed to leave or enter the hotel. According to the Diario de Avisos, both the Italian doctor and his wife have been staying at the hotel for a week.

Italy's iconic La Scala opera house closes amid coronavirus ...
Classic FM-16 hours ago, Italy virus. The coronavirus in Italy has already left at least 231 infected, among which seven have died, all of them elderly and/or with pathologies.

Netherlands issues new Italy travel warning over coronavirus ...
NL Times-2 hours ago
The outbreak of coronavirus Covid-19 in Italy prompted the Dutch Ministry of Foreign Affairs to warn against visiting a number of municipalities ...

Italy locks down 'hot spot' cities; WHO says coronavirus 'not yet ...
USA TODAY-6 hours ago
A swath of "hot spot" cities and towns across northern Italy were in lockdown Monday as authorities battled to contain a fast-spreading outbreak ...
Coronavirus in Italy: Europe's first big Covid-19 outbreak roils ...
In-Depth-Fortune-20 hours ago

Coronavirus Cases Continue to Surge in Italy, Iran, and South ...
New York Magazine-4 hours ago
The world is not ready for global outbreak of the coronavirus, the World Health Organization warned on Monday, but amid major spikes of ...
Outbreak in Northern Italy Poses National Challenge
In-Depth-The New York Times-19 hours ago

Coronavirus updates: Italy to host summit with neighboring ...
Deutsche Welle-1 hour ago
04:37 Italy will be hosting a coronavirus summit with the health ministries ... After the detection of seven deaths and 220 cases in Italy, Europe is ...

Coronavirus: Iran denies cover-up as six deaths reported in Italy
The Guardian-18 hours ago
The Iranian government has denied trying to cover up the full extent of an outbreak of the coronavirus, as Italy reported six deaths and officials ...