What is the warmest temperature in Antarctica?. How hot can Antarctica get?. Antarctica Climate and the effects of climate change.

🔹 In Antarctica, the air temperature in the Antarctic peninsula has increased by 3°C.

Although it does not seem much, it is five times the average rate of global warming, as reported by the Intergovernmental Panel on Climate Change (IPCC). 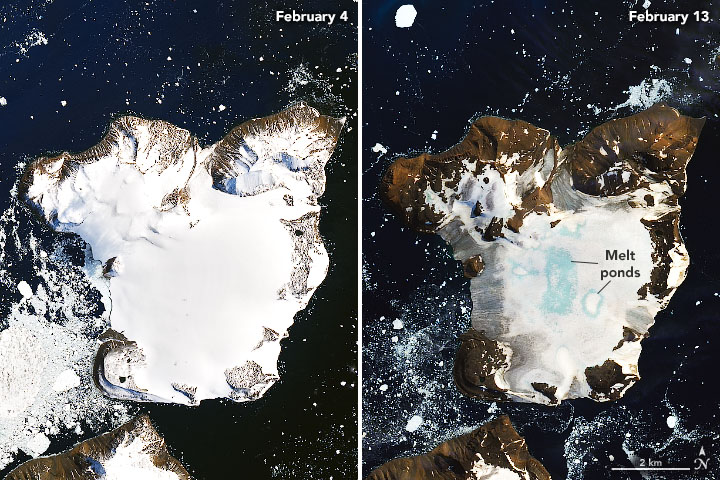 
Climate Change in Antarctica: On February 6, 2020, weather stations recorded the hottest temperature on record for Antarctica. Thermometers at the Esperanza Base on the northern tip of the Antarctic Peninsula reached 18.3°C (64.9°F)—around the same temperature as Los Angeles that day.


🔹 The warm spell caused widespread melting on nearby glaciers of antarctic ice.

The heat is apparent on the map below, which shows temperatures across the Antarctic Peninsula on February 9, 2020.

The map was derived from the Goddard Earth Observing System (GEOS) model, and represents air temperatures at 2 meters (about 6.5 feet) above the ground. The darkest red areas are where the model shows temperatures surpassing 10°C (50°F).


The effects of climate change

Mauri Pelto, a glaciologist at Nichols College observed that during the warming event, around 1.5 square kilometers (0.9 square miles) of snowpack became saturated with meltwater (shown in blue above).

About 20 percent of seasonal snow accumulation in the region melted in this one event on Eagle Island.


Climate change in the antarctic

“I haven’t seen melt ponds develop this quickly in Antarctica,” said Pelto. “You see these kinds of melt events in Alaska and Greenland, but not usually in Antarctica.” He also used satellite images to detect widespread surface melting nearby on Boydell Glacier.

Pelto noted that such rapid melting is caused by sustained high temperatures significantly above freezing. Such persistent warmth was not typical in Antarctica until the 21st century, but it has become more common in recent years.


High temperatures in Antarctica in Febuary

The warm temperatures of February 2020 were caused by a combination of meteorological elements. A ridge of high pressure was centered over Cape Horn at the beginning of the month, and it allowed warm temperatures to build.

Typically, the peninsula is shielded from warm air masses by the Southern Hemisphere westerlies, a band of strong winds that circle the continent.

However, the westerlies were in a weakened state, which allowed the extra-tropical warm air to cross the Southern Ocean and reach the ice sheet. Sea surface temperatures in the area were also higher than average by about 2-3°C.

Dry, warm foehn winds also could have played a part. Foehn winds are strong, gusty winds that cause downslope windstorms on mountains, often bringing warm air with them. In February 2020, westerly winds ran into the Antarctic Peninsula Cordillera.

As such winds travel up the mountains, the air typically cools and condenses to form rain or snow clouds. As that water vapor condenses into liquid water or ice, heat is released into the surrounding air.

This warm, dry air travels downslope on the other side of the mountains, bringing blasts of heat to parts of the peninsula. The drier air also means fewer clouds and more direct sunlight.


With warmer air in the surrounding atmosphere and ocean, the conditions were conducive this month for a foehn wind event.

This February heatwave was the third major melt event of the 2019-2020 summer, following warm spells in November 2019 and January 2020.

“If you think about this one event in February, it isn’t that significant,” said Pelto. “It’s more significant that these events are coming more frequently.“


Why is sea level rise so important?

🔹 Every year about 10 million people are affected by coastal floods.

A study by the UK Met Office shows that the population is migrating to coastal areas and this number will rise to 30 million by 2080.

The same study suggests that a rise in sea level of 44 cm (an average estimate) would bring the number of people affected to over 100 million In the UK, the replacement of the Thames barrier and some 300 km of protective structures to protect London will need to be overhauled by 2030.