Boston Dynamics hands over their robot dog to MythBusters to train

Now, former MythBusters host, Adam Savage, just got one of his own and wants to see what he can do with it now that Spot's Software Development Kit (SDK) is publicly available.

"Throughout the year, the artist and engineer will develop and implement custom hardware and software on SPOT that demonstrates the platform's flexibility through a variety of entertaining applications," Boston Dynamics said in a statement.

Adam Savage @dog_rates, I know you only rate dogs. Does Spot count? 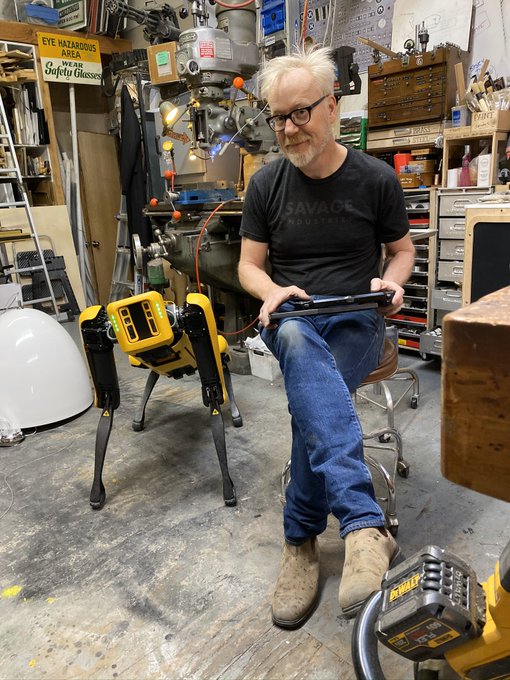 The four-legged robot weighs 55-66 pounds (25-30 kilograms) and can carry around 31 pounds (14 kilograms). SpotMini is fully electric and can run up to 90 minutes with a charge.

A new video released Thursday by Adam Savage shows him building and designing with SPOT, integrating it into the workshop and undertaking field adventures, including an outdoor training course shown in the video.

First, Savage tests Spot's ability to climb rocks, with mixed results. Then, when Savage puts the robot into the tracking configuration, he succeeds on the first attempt.

Savage continues its tests by guiding Spot through a large metal pipe tunnel, then dragging it under a small bridge and finally up stairs.

"I always thought these things were amazing pieces of engineering every time I saw them, but in fact by putting it to the test it makes it clear at an even deeper level what a miracle spot is," Savage said in a video.

Spot robot dogs went on sale for the first customers in September 2019. Since then, "customers have been developing software applications and custom loads on the platform in industries ranging from construction, energy, public safety, mining and entertainment," according to Boston Dynamics.

The first users of Spot have had robots on hand and on site for a few months, and we are seeing a community of early adopters come together to build solutions on the platform.

There's no better way to make it easier for customers to get the tools they need to create new and exciting applications for the robot than to connect the already vibrant and creative community that already leverages SPOT, he said.

What is a spot Mini?

A clever robot that climbs stairs with unprecedented ease and crosses uneven terrain, but small enough to be used indoors. Built as a rugged and adaptable platform.

The robot can move where wheeled robots cannot and still carry payloads with endurance far beyond airborne drones.

With a speed of 1.6 m/s a runtime of 90 minutes and a Swappable battery.

You've heard that they say that good things come in small doses, well, for good and small is the Spot Mini robot, a robot that will change and facilitate your life forever.

The Spot mini robot is a robot dog created by the Boston Dynamics company. Boston Dynamics has been working on the Spot Mini robot project for several years now, and it has undoubtedly become a company that produces high quality robots, capable of performing multiple functions at high performance.

Characteristics of the Spot Mini robot

The Spot Mini is a small four-legged robot that can move around comfortably in your home or office. The Spot Mini robot is powered by electricity and has an autonomy of approximately 90 minutes, depending on what it is doing. In addition, Boston Dynamics claims that this robot is the quietest of all those they have built.

This four-legged robot is 84 cm tall, and weighs about 25 kilos. It incorporates a 3D vision camera and is capable of lifting objects up to 14 kilos in weight.

The Spot Mini robot has all the mobility that its big brother, the Spot Classic, already had, but it also has the ability to pick things up, thanks to its 5-degree freedom arms, as well as its perceptive sensors.

The sensors also assist in the movement and handling of objects, and, apart from these, also include stereo cameras, deeper cameras and a position and force sensor in the extremities.

In addition, the structure of its neck is also a fundamental factor, since it serves to grasp, manipulate and transport objects, which gives it great functionality and versatility.

Thanks to the sensors and the very long neck, it can help you with household tasks such as taking out the garbage, or putting the dishes in the dishwasher. It also has the ability to climb steps, in case you want it to pick up something from an upper floor, as well as the ability to turn on itself and get up after a fall.

However, the Spot Mini robot can also move autonomously, using its component cameras and mapping system. You will be able to tell it the route where it should go, but you will not be able to determine how to move its legs, as this is one of the major innovations of the product.

At the conference organized by TechCrunch, Boston Dynamics clarified that the Spot Mini robot is designed to function as a quadruped robot capable of reaching more complicated and less accessible areas that wheeled devices cannot.