Playstation 5: New pictures of the devkits also show the controller

A new image of the Playstation 5 Devkit has landed on the net. This time you can see the controller as well.

The camera doesn't get really close - and from a distance you can't see any world-shaking differences.

Patent drawings and pictures of an early version of the Playstation 5 developer kit were already available. Now another recording has landed on the net and confirms that the console actually seems a bit strange in the development version.

This time also a suspected Dualshock-5 controller can be seen. However, the gamepad is not really prominent in the picture. From what you can see, it doesn't differ much from its predecessor.

At first glance you can't even tell if it's the Dualshock 4 of the current Playstation generation after all. However, there is no light bar and with a little imagination the triggers also seem to have been adjusted. Both would coincide with Sony's patent, a patent made by Sony only recently.

Yes, this is the PlayStation 5 devkit. The reason it's large and v-shaped is to make them more easily stackable for devs who are running multiple stress tests. The cooling is optimized to push air out of the sides and center.
https://twitter.com/Alcoholikaust/status/1200796076535623681, Playstation 5: New pictures of the devkits. 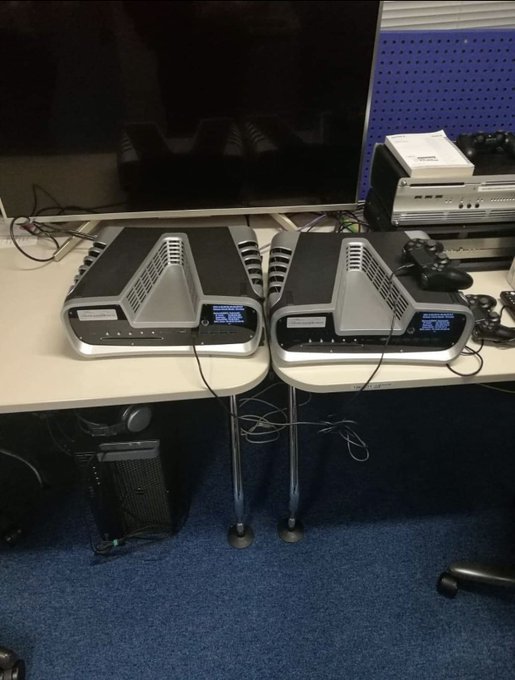 The strange construction of the Devkits makes the devices stackable. The market-ready Playstation 5 will probably look different, as you can see from the two devices in the background to the right of the monitor. These are developer kits of the Playstation 4 - and they don't even remotely resemble the commercially available consoles.

Sony itself is still in the dark as far as the final design is concerned. Since the new console generation is not expected to be launched until the end of next year, there is still plenty of time for announcements.

According to reports Playstation 5 and Xbox are relying on a NVMe SSD from Samsung. In addition one expects a Navi-based graphic component and a Zen-2-CPU. In addition to an NVMe SSD, Sony already confirmed hardware ray tracing and a 4K Blu-Ray drive.