Around 100 tourists have been surprised by a sudden volcanic eruption on the island of White Island in New Zealand.


Checked photo timestamps. Last photo from me standing on the land was 13:49; this first photo of the eruption was 14:12, about a minute or two into the eruption. pic.twitter.com/hyqQuO4vNq
— Michael Schade (@sch) December 9, 2019

There was at least one dead. Several people are still missing.

A volcano erupted on the New Zealand island of White Island on Monday. The eruption occurred around 14.30 hrs local time (2.30 hrs CET). According to first information of the authorities several dozen tourists were on the island at this time.

At least one person was killed. According to a spokesman, the police fears that there could be further deaths. White Island lies about 50 kilometres north of the coast of New Zealand's North Island. Even from there the huge ash cloud over the island could be seen.

The local mayor, Judy Turner, said that rescue workers were on site and there had been numerous injuries. Not known how many or with what injuries, but rescue workers are desperately trying to get these people away from the island to a hospital.

According to St John Rescue, up to 20 people are estimated to be injured, but medical teams are still on their way. Several helicopters and airplanes were in use in the area, over which a dense white cloud of smoke hung over the volcano.

My god, White Island volcano in New Zealand erupted today for first time since 2001. My family and I had gotten off it 20 minutes before, were waiting at our boat about to leave when we saw it. Boat ride home tending to people our boat rescued was indescribable. #whiteisland 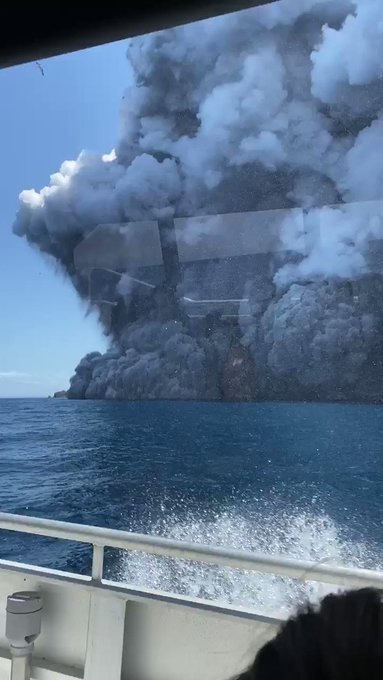