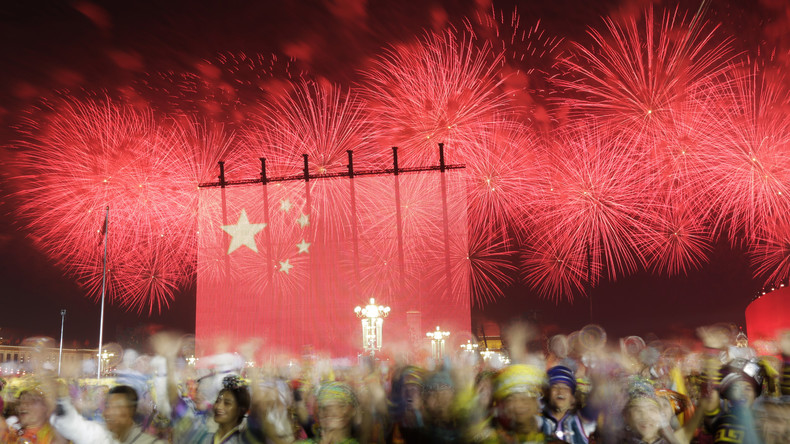 The Western media may try to obscure this, but it is obvious: China has accomplished in 70 years what no country has managed to do in two centuries.

"The pre-1949 China, "is a country of the Middle Ages, a swarm of beggars with stumps, children covered with wounds, black pigs and scrawny dogs.

Made up of 90% of starving farmers, the population has the lowest standard of living on the planet: it is lower than that of India's former British and sub-Saharan Africa.

In this land where life is hanging by a thread, life expectancy is between 36 and 40 years and 80% of the Chinese population is illiterate.

Today, the Chinese economy accounts for 18% of global GDP in purchasing power parity, and it surpassed the US economy in 2014.

As the leading creditor, China has the largest foreign exchange reserves in the world ($ 3 trillion).

As the largest trading partner with 130 countries, it has contributed 30% to the global growth over the last decade.

With 400 million people, the Chinese middle class is the largest in the world, and 140 million Chinese went on holiday abroad in 2018.

This economic development has improved the living conditions of Chinese people dramatically.

The infant mortality rate is 7 ‰ vs 30 ‰ in India and 6 ‰ in the United States. Illiteracy is almost eradicated. The enrollment rate is 98.9% in primary schools and 94.1% in secondary schools.

Xi Jinping promised its eradication by 2020. According to Branko Milanovic, a former economist in Head of the World Bank, the emergence of a huge middle class in China is the main cause of the reduction of global inequalities between 1988 and 2008.

In twenty years, 700 million people have been pulled out of poverty. The average wage has doubled, in particular as a result of labor mobilization, and foreign companies have begun to relocate their activity in search of a cheaper labor force.

One of the fundamental issues of development is that of access to modern technologies.

Mao's China first benefited from USSR assistance, but was halted in 1960 during the Sino-Soviet schism. It is to solve this crucial problem that Deng Xiaoping organized in 1979 the gradual opening of the Chinese economy to external capital.

In 40 years, the Chinese have assimilated the most sophisticated technologies, and the student has surpassed the master! Today, China's share of high-tech industries is 28% of the global total and is expected to outperform the United States in 2021.

It is true that China has considerable human resources. It sends 550,000 students abroad and receives 400,000 students.

It is number one in the world for science, technology and engineering graduates, and is four times more educated than the United States. .

This technological breakthrough of the Chinese giant is now going hand in hand with the ecological transition.

As a signatory to the Paris Climate Agreement, China is the world's largest investor in renewable energy.

60% of the solar panels and 50% of the wind turbines of the planet. 99% of the electric buses in service in the world are manufactured in China.

50% of electric vehicles and it manufactures three times more than the United States.

The Chinese public company CRRC is the world leader in the construction of TGV: it manufactures 200 trains a year and works for 80 countries.

Finally, China has undertaken the largest reforestation operation on the planet (35 million hectares).

Taking seriously the disastrous pollution of the atmosphere in the Beijing area, it has succeeded in reducing by 50% the emissions of toxic particles in five years.

This spectacular development of the People's Republic of China is the result of 70 years of titanic efforts. To achieve this, the Chinese have invented an original socio-political system, but that the categories used in the West are hard to describe.

Far from being a "totalitarian dictatorship", it is a neo-imperial system whose legitimacy rests exclusively on the improvement of the living conditions of the Chinese people.

As the country's governing body since 1949, the Chinese Communist Party knows that the slightest deviation from the line of collective well-being would be misunderstood and bring about its downfall.

To drive the development of the country, the Chinese Communists built a mixed economy driven by a strong state. Its primary objective is growth, supported since the 1979 reforms on the modernization of SOEs dominating key sectors, building a strong private sector, reliance on foreign capital, and technology transfer from more advanced countries.

Contrary to what is sometimes said, it was Mao Zedong himself who initiated this process in 1972, when he re established relations with the United States.


To develop the country, you had to dine with the devil! Obviously

the Chinese Communists have learned to do it. But this rapprochement with the capitalist West, this "acrobatic compromise" rightly targeted by some Marxists, was a means and not an end.

While justifying economic openness, Jiang Zemin recalled in 1997 that China did not lose sight of the building of socialism. This is why the state must drive development, public property remain dominant and the financial sector remain under control.

Two centuries ago, China was still the workshop of the world. Worsening its internal contradictions, Western imperialism has ruined the aging Manchu empire.

The wars of the twentieth century, in turn, plunged the country into chaos. In the eyes of the Chinese, the People's Republic of China has the virtue of having put an end to this long century of misery and humiliation that began in 1840 with the "opium wars".

More precisely, Maoism is characterized by the attempt, to use Marxist terminology, to accelerate the development of the productive forces by focusing on the revolutionary transformation of social relations.

In other words, to generalize the class struggle inside the country to consolidate socialism.

This voluntarism has had positive effects in helping to generalize education, but it has completely failed to stimulate the economy. In sharp contrast with the population growth caused by health progress, the collapse of agricultural production caused the catastrophe of the "Big Leap Forward", which was responsible - with the climatic conditions and the Western embargo - for the last famine that knew China (1959-1961).

With the Cultural Revolution, culminating in 1966-68, Mao again decided to mobilize the masses, but against the party itself to prevent it from "restoring capitalism" and sinking in Soviet-style "revisionism".

By cultivating the ideological effervescence of a fanatical youth, it caused unnecessary violence and destruction that thwarted the development effort. Turning empty, this agitation generated a chaos that necessarily called his negation, and the People's Liberation Army did indeed put an end to it.

In a resolution adopted in 1982, the Chinese Communist Party made a harsh judgment on this historical experience, described as a "leftist slippage", and has gradually initiated reforms.

Marxist in his own way, the "socialism with Chinese characteristics" defined in 1997 is based on the idea that the development of the productive forces is the indispensable condition for the transformation of social relations, and not the opposite.

As Jean-Claude Delaunay writes, "the revolution was conceived by the founders of Marxism as a fruit to be picked when it was ripe, and would be in all likelihood because the orchard was provided."

But for the Chinese communists, the revolution would rather be "the fruit of an orchard which should first be cultivated, then grow and cut into consequences".

After having liberated and unified the country, abolished the patriarchate, realized the agrarian reform, started the industrialization, endowed China with the nuclear umbrella, overcome the illiteracy, gave to the Chinese people 24 years more of life expectancy, but also committed of tragic mistakes that the Chinese people learned, Maoism passed away after 25 years of rule (1950-1975).

His successors then took into account inflections of international life and benefited from globalization, but never let go of the rudder.

Armed with the lessons of the past, the Chinese have multiplied their GDP, industrialized the country, overcome poverty, and raised the scientific and technological level of the country in an unprecedented way.

The historical experience of the People's Republic of China is unique: it is the success of an exit strategy from underdevelopment on an unprecedented scale, and under the exclusive leadership of a communist party.

Admittedly, the problems remain immense (aging of the population), the astonishing paradoxes (a socialism with capitalists), the not insignificant fragilities (slackening of the growth).

But China in 2019 intends to continue the movement. It intends to build a "middle-class society", develop its internal market, promote the ecological transition.