Soviet spacecraft Luna 3 probe photos of the dark side of the moon.

On October 7, 1959, the Soviet interplanetary spacecraft Luna-3 for the very first time in human history took a photograph of the dark side of the moon. 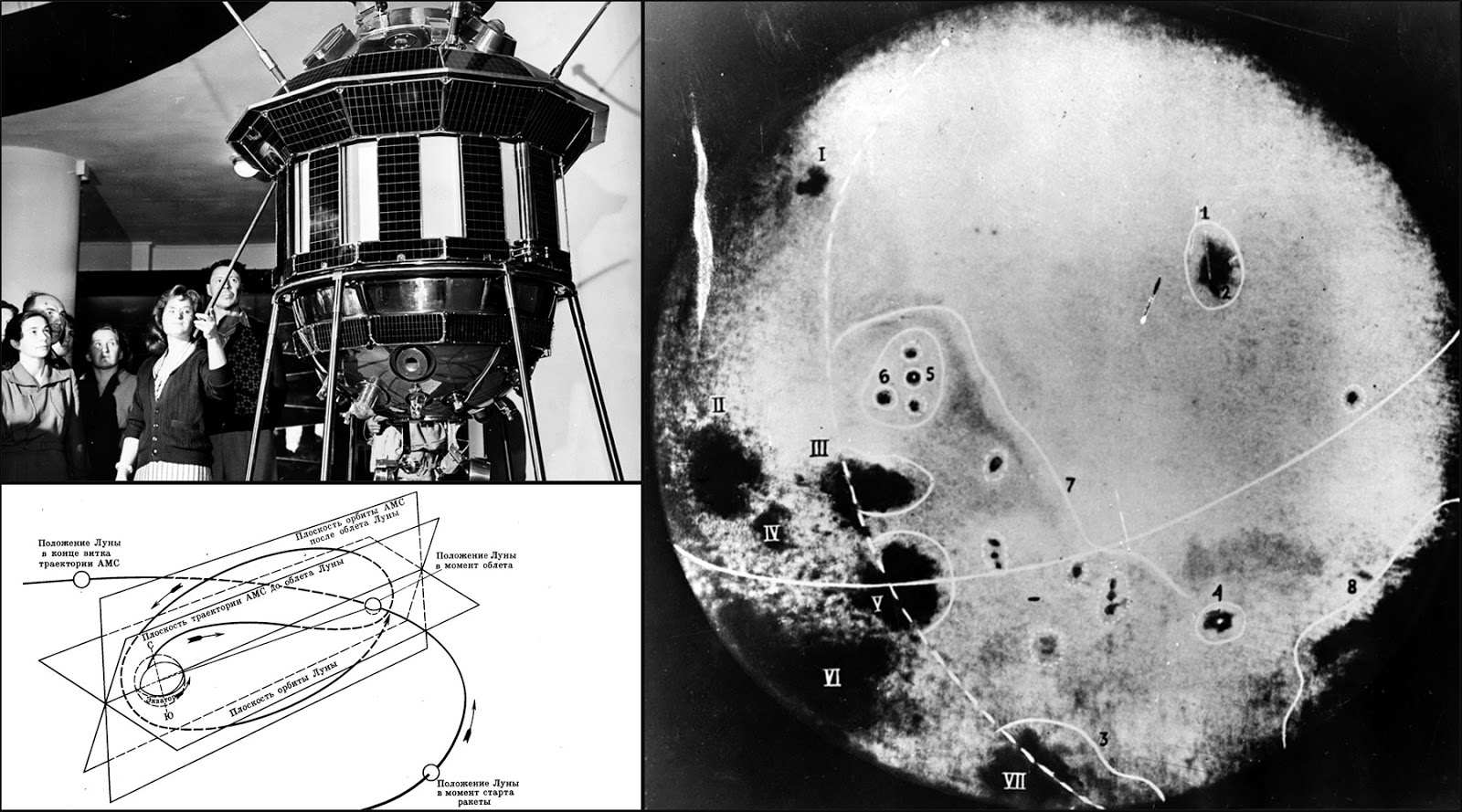 A few weeks later, the image was released in the paper Pravda and circled around the pages of publications around the globe.

The preparation of the flight of the spacecraft for orbit was carried out by the design bureau under the management of Sergei Korolev.

After launching from the Baikonur Cosmodrome, the spacecraft circled the Moon from the back side and, having actually carried out the gravitational maneuver for the very first time and went back to Earth's orbit.

Due to the proximity of the periods of rotation of the Moon around the Earth and around its axis only one lunar hemisphere can be observed.


In the 50s, many believed that it was impossible to photograph the dark side of the moon.


In the USSR, the preparation of the flight of the spacecraft to the dark side of the moon was conducted by a team of scientists from OKB-1 under the leadership of Sergei Korolev.


The orientation system was developed by a group led by mechanical physicist Boris Rauschenbach.

The third spacecraft successfully launched to the Moon and the first to return images of the lunar far side.

The spacecraft returned very indistinct pictures, but, through computer enhancement, a tentative atlas of the lunar farside was produced.

These first views of the lunar far side showed mountainous terrain, very different from the near side, and only two dark regions which were named Mare Moscovrae (Sea of Moscow) and Mare Desiderii (Sea of Dreams).

(Mare Desiderii was later found to be composed of a smaller mare, Mare Ingenii (Sea of Ingenuity) and other dark craters.) 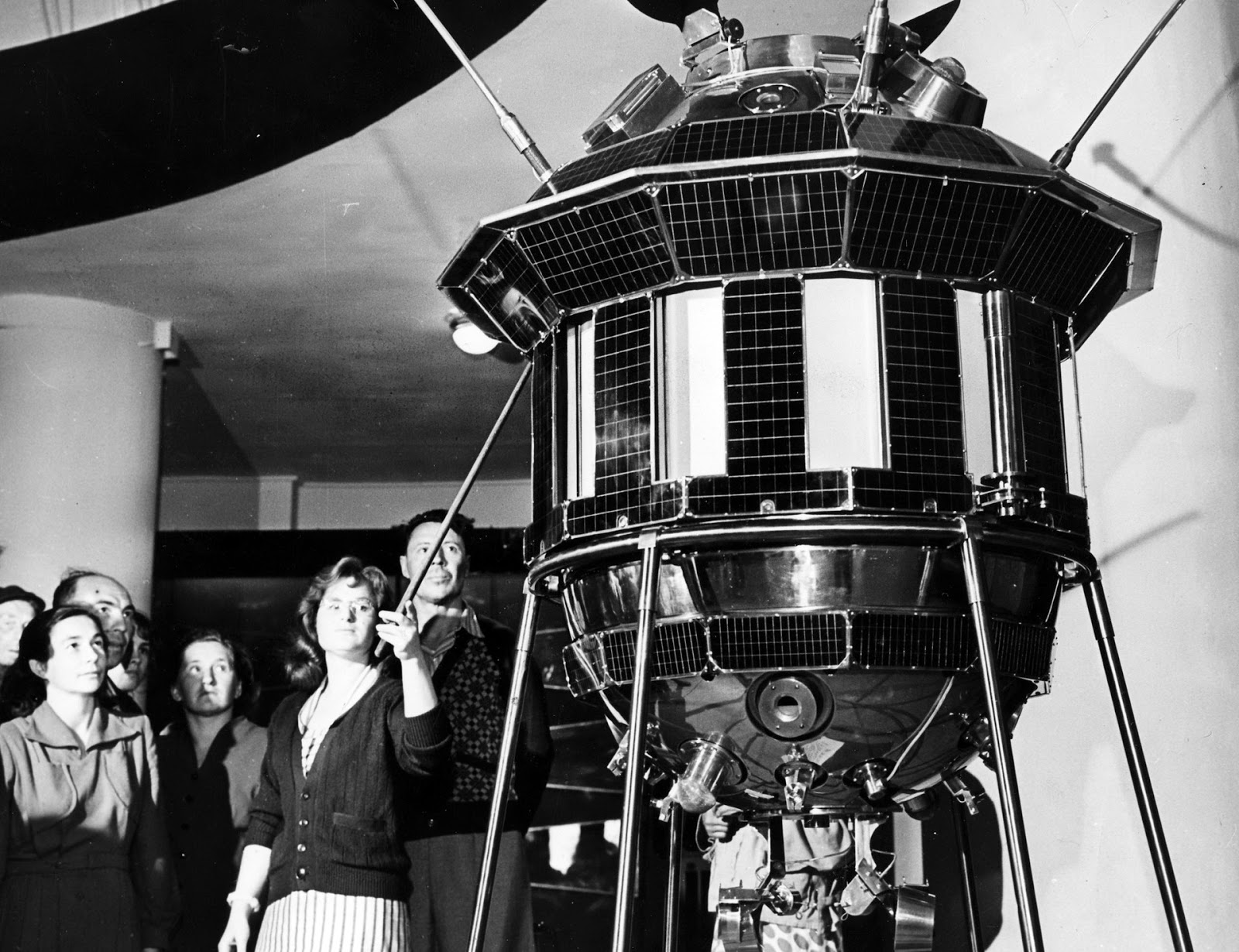 Luna 3 spacecraft was a cylindrically shaped canister with hemispherical ends and a wide flange near the top end.
Solar cells were mounted along the outside of the cylinder and provided power to the chemical batteries stored inside the spacecraft.

Jalousies for thermal control were also positioned along the cylinder and would open to expose a radiating surface when the interior temperature exceeded 25 degrees C.

The upper hemisphere of the probe held the covered opening for the cameras.

Four antennae protruded from the top of the probe and two from the bottom.

Other scientific apparatus (micrometeoroid and cosmic ray detectors) was mounted on the outside of the probe.

Gas jets for attitude control were mounted on the outside of the lower end of the spacecraft. Photoelectric cells were used to maintain orientation with respect to the Sun and Moon.
The interior of the spacecraft held the cameras and film processing system, radio equipment, propulsion systems, batteries, gyroscopic units for attitude control, and circulating fans for temperature control.

The spacecraft was spin stabilized and was directly radio-controlled from Earth.

A representative of the CPSU Central Committee, who arrived at a meeting with scientists, said: “The Homeland will not forget you: you need to create an on-board device, the first transceiver for space communications”.


The spacecraft circled the moon from the opposite side in a direction from south to north, passing 6200 km from its surface.


During the flight, for the first time in history, a gravitational maneuver was carried out in practice, the orbit of an Luna-3 changed under the influence of gravity of a celestial body.

On October 7, the first photo of the far side of the moon was taken from the spacecraft.


The session lasted 40 minutes, and after the film developed on board, the images were transmitted to Earth.

The imaging system on Luna 3 was designated Yenisey-2 and consisted of a dual lens camera, an automatic film processing unit, and a scanner.

The 200 mm objective could image the full disk of the Moon and the 500 mm could take an image of a region on the surface.

The camera was fixed in the spacecraft and pointing was achieved by rotating the craft itself.

A photocell was used to detect the Moon and orient the upper end of the spacecraft and cameras towards it.

Detection of the Moon signaled the camera cover to open and the photography sequence to start automatically. After photography was complete, the film was moved to an on-board processor where it was developed, fixed, and dried.

Commands from Earth were then given and the film was moved to a scanner where a bright spot produced by a cathode ray tube was projected through the film onto a photelectric multiplier.

The spot was scanned across the film and the photomultiplier converted the intensity of the light passing through the film into an electric signal which was transmitted to Earth.

A frame could be scanned with a resolution of 1000 lines, the transmission could be done at a slow rate for large distances from Earth and a faster rate at closer range.

After launch on an 8K72 (number I1-8) on a course over the Earth's north pole the Blok-E escape stage was shut down by radio control from Earth at the proper velocity to put the Luna 3 on a trajectory to the Moon.

Initial radio contact showed the signal from the probe was only about half as strong as expected and the interior temperature was increasing.

The spacecraft spin axis was reoriented and some equipment shut down resulting in a drop in temperature from 40 C to about 30 C.

At a distance of 60,000 to 70,000 km from the Moon, the orientation system was turned on and the spacecraft rotation was stopped.

The lower end of the station was oriented towards the Sun, which was shining on the far side of the Moon.

The spacecraft passed within 6,200 km of the Moon near the south pole at its closest approach at 14:16 UT on 6 October 1959 and continued on to the far side.

On 7 October the photocell on the upper end of the spacecraft detected the sunlit far side of the Moon and the photography sequence started.

A total of 29 photographs were taken, covering 70% of the far side. After the photography was complete the spacecraft resumed spinning, passed over the north pole of the Moon and returned towards the Earth.

Attempts to transmit the photographs to Earth began on 8 October but were believed to be unsuccessful due to the low signal strength. As Luna 3 got closer to Earth a total of 17 resolvable but noisy photographs were transmitted by 18 October.

Contact with the probe was lost on 22 October. The probe was believed to have burned up in the Earth's atmosphere in March or April of 1960, but may have survived in orbit until after 1962. 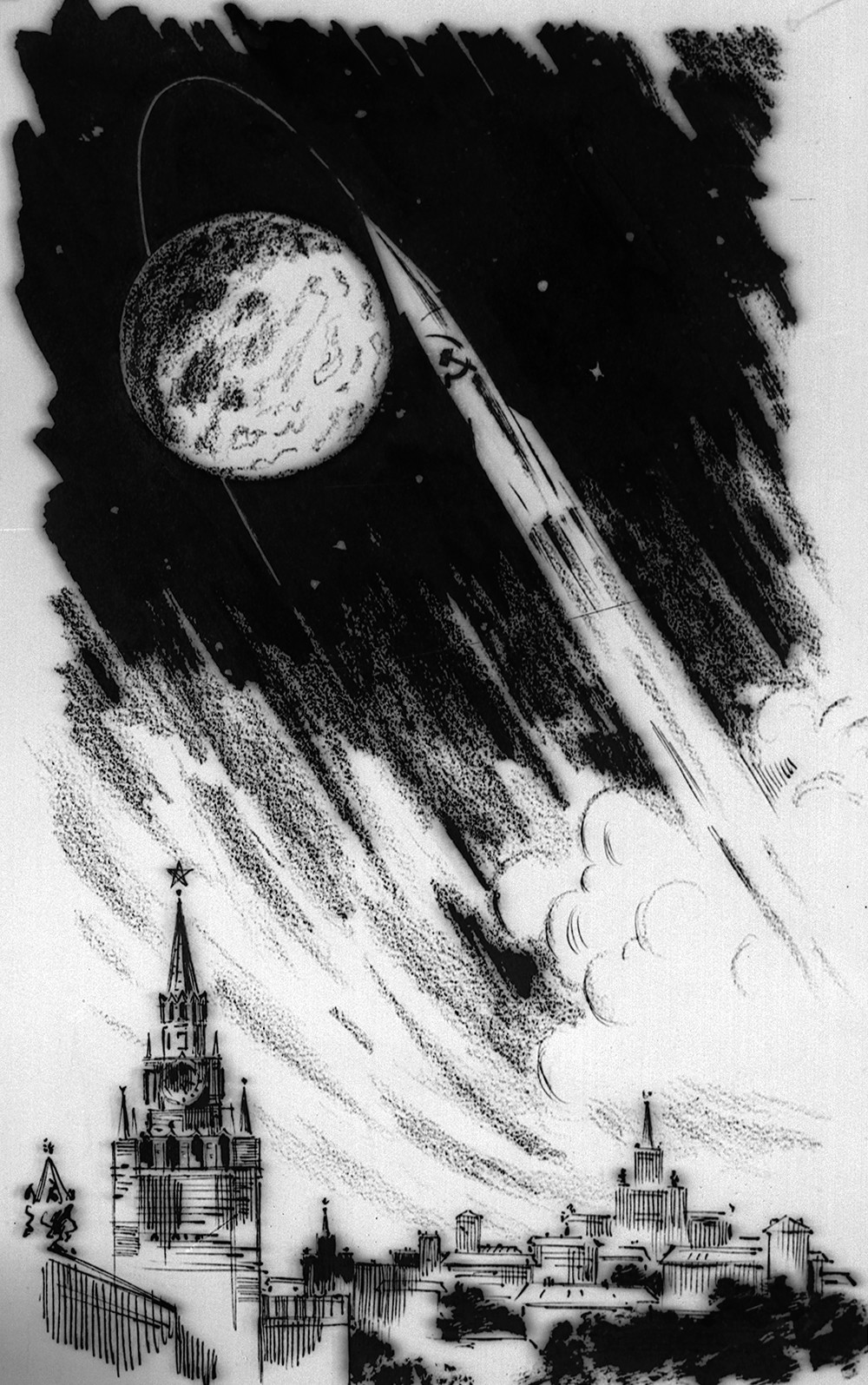 The first photograph of the far side of the moon was presented to the general public on October 27, 1959.


Then the picture appeared on the front page of the newspaper Pravda, Also published an article about the Luna-3 spacecraft and its photo. 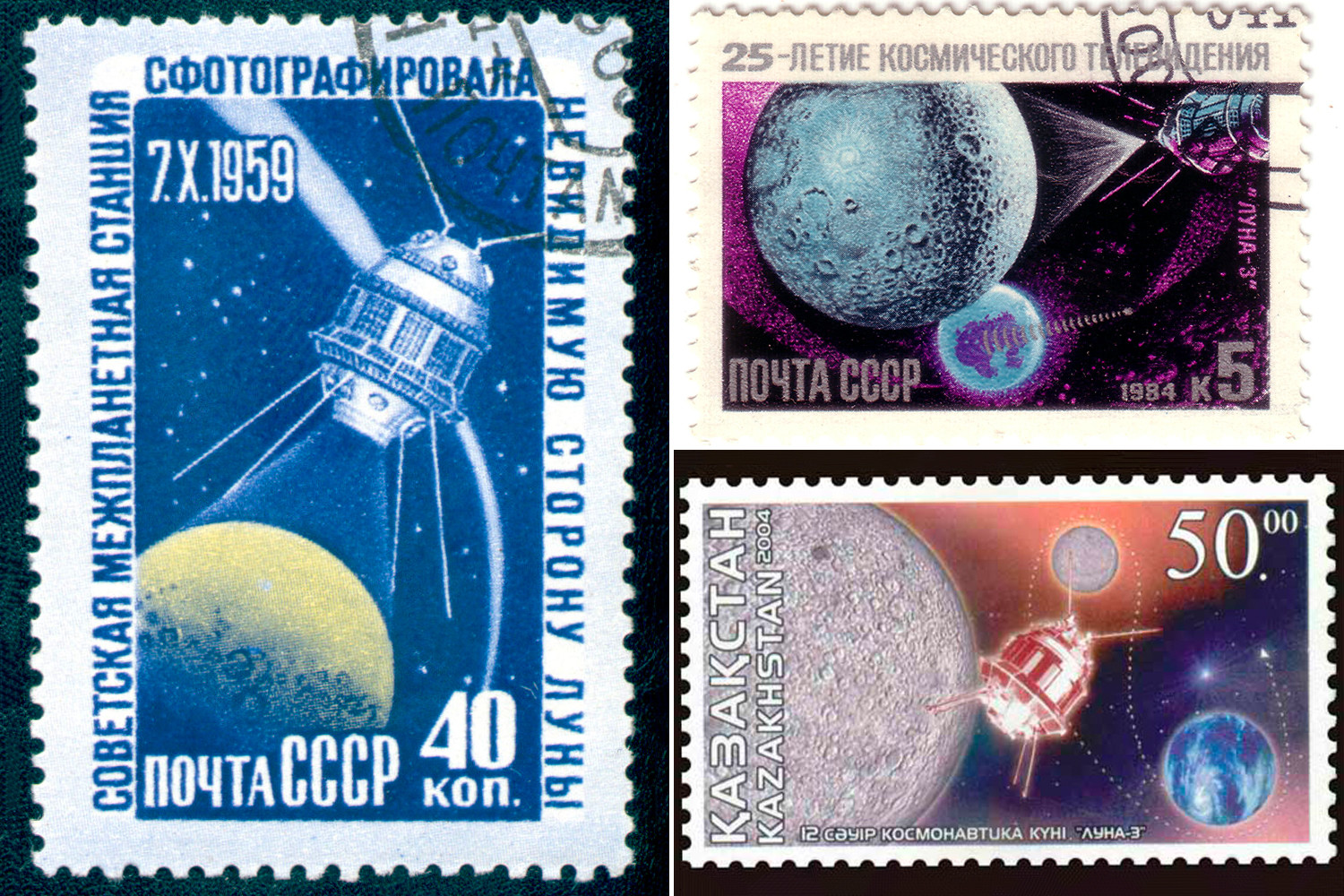