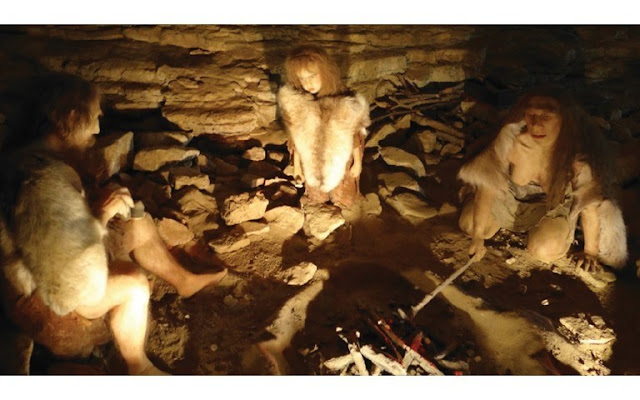 About 128,000 years ago, the world began to warm up. It was a relatively brief respite between two ice ages, and it lasted about 14,000 years. Temperatures reached about two degrees Celsius above the average in the 20th century, glaciers thawed and large parts of Europe gave way to dense forests.

The Neanderthals who lived on the mainland had a hard time coping with sudden climate change.

In a new study, researchers from France examined bones and other findings from a cave in the southeastern part of the country and concluded that those ancient people were unable to find enough food in the warmer climate and had to resort to cannibalism to support themselves.

The world was heating up, the mammoths were gone

Numerous bones and tools were found in the soil of the Moula-Guercy cave, from various periods of Neanderthal settlement in the area.

Which dates back to the period between the Ice ages, the cave contains bones and charcoal that were preserved in an excellent manner and enable the researchers to reconstruct the environment of that period, as well as the health of the cave residents.

An examination of the teeth found in this layer indicated that those living there suffered from tooth enamel damage, which is seen in people who did not receive enough food during adolescence.

The reason for this, researchers believe, lies in the rapid change in their living environment and their difficulties in adapting to the new conditions.

"Climate change from the ice age to the warmer period was very rapid," said Emmanuel Desclaux, one of the researchers who worked on the new article, "We are not talking about geological order but on a more human scale.In a short time, perhaps several generations, The landscape has changed completely. "

The mammoths, the great deer and the rhinoceros who were wandering also disappeared. The new forests that grew in southern France had smaller animals: rodents and reptiles. Whether the Neanderthals did not know how to hunt these animals or that these animals did not provide enough meat to feed them, the change seems to have caused the inhabitants of the cave hunger and distress.

Hunger led the Neanderthals to a custom that seemed particularly barbaric to us: cannibalism. At least six individuals, two adults, two boys, and two children were found in the same layer of the cave, with signs that their flesh was eaten.

Many bones showed signs of cutting the meat and removing it from the bone with stone knives, skulls and long bones broken with a hammer, and the bones of the fingers had teeth marks that matched the Neanderthal teeth. The first evidence of cannibalism in the cave was reported in 1999, and the new article adds and especially places it in the context of climate change and environmental change.

Evidence of cannibalism in our early relatives was also seen elsewhere in Europe. About two years ago, findings from a cave in Belgium that included bones with cutting marks from 40,000 years ago were published, and earlier studies show similar evidence.

"There is convincing circumstantial evidence from all over Europe that neanderthals at certain times have not been sickened by cannibalism," said Daniel Corin, an anthropologist who was not involved in the new study, to the site of Gizmodo.

Bone marrow and skull bones show signs of deliberate rupture shortly after death, indicating efforts to reach the bone marrow and even the brain, tissue rich in calories. " The macabre practice is not unique to Neanderthals and is observed in our species, Homo sapiens, in different places and times.

The environmental change and the evidence that the Neanderthals suffered from starvation led the researchers to speculate that in the case of the Mula-Garcy Cave, cannibalism was due to a nutritional need.

It is very possible, the researchers say, that the practice stopped when conditions improved. "The findings can be interpreted as a single and short period of cannibalism for survival, in response to nutritional distress caused by rapid and extreme environmental changes."